Welcome to the Key West page!

Key West is at the end of the Florida archipelago, lying roughly 90 miles north of Cuba and 166 miles West, by US-1, from Miami, FL. The island is about 4 miles long and 1 mile wide. Key West, the southern-most point in the United States is also the end of the road or actually the beginning of Highway US-1. Mile “0” on US-1 is in the middle of old town. The population in 2016 was estimated to be 26,990. That
population swells during the winter months when “snowbirds” fleeing the cold weather up north flock to Key West. There are many artists and creative people living in this small island city. Today there is no dedicated Cabaret Theatre, but the art form is alive and well in a number of venues. Some of these include: Lateda, The Gardens Hotel, Tavern N Town, Mangoes, the Tennessee Williams Theatre, the Waterfront Playhouse, the Key West Theatre, the Red Barn Theatre, the Green Parrot, the grounds of the Little White House, Berlin’s Speakeasy at A & B Lobster House, and the Studios of Key West. These venues frequently feature jazz, folk and country singers with accompaniment or rock bands. Some of these singers specialize in music from the American song book. Many performers take requests.
Some of these venues are theatres suitable for plays and musical theatre and some periodically have Cabaret singers on their stages. The Tennessee Williams Theatre features a Cabaret series each year. Also, out of town Cabaret artists often bring their shows to Key West Theatres. Many restaurants around town have live background music.

Concerts in garden settings are not uncommon. We are blessed to have numerous talented, versatile musicians in Key West. Check the club’s websites when you plan your trip. I will keep you posted on upcoming performances that are of particular interest to cabaret lovers.

The Studios of Key West Berlin’s Speakeasy Key West at A & B Lobster House The first European to visit Cayo Huesa, the original name for Key West, was Spaniard Juan Ponce de Leon in 1521. In 1763 the British took control of Fl. Key West was a desirable location because it had a reliable source of fresh water, it had a deep harbor and was strategically located on the 90 mile wide deep shipping lane between the Atlantic Ocean and the Gulf of Mexico. In 1822, Lt. Commander Matthew Perry claimed the Keys as United States territory. He renamed Cayo Huesa, Key West. Early industries were related to the sea: fishing, sponging
and salt production from sea water. Because of the large number of coral reefs surrounding the Keys, early ships coming near Key West often were wrecked when they ran aground. In many cases these ships were loaded with valuable cargo. The rescuers from Key West who went out
to save the lives of the passengers also took that valuable cargo as payment for their services. Wreckers brought great wealth to Key West and it was during this period when many of the fine mansions located here were built. In the 1830’s Key West was the wealthiest per capita city in the U.S. In 1889, Key West was the wealthiest city in FL. Since many of the homes large and small were built during the same time period, there is a uniformity of architectural style in Key West, especially in Old Town. This uniformity adds to the visual charm of the place.

Due to the beauty of the town and it’s favorable climate, it has long been the home of artists and creative people. There are many art galleries selling works by local painters and artisans. Two of the most notable people who have called Key West home are play write, Tennessee Williams and author, Earnest Hemmingway. Key West has a theater named for Tennessee Williams and a small museum dedicated to the man and his works. The Earnest Hemmingway home is open to the public and a very popular destination. Each year there is a Hemmingway look a-like contest in the town. The easygoing small-town atmosphere and the large number of creative people give the place a bohemian feeling.

Since 1823, because of the strategic location, Key West has had a military presence. Fort Zachary Taylor was constructed from 1845 to 1866. The fort was an important outpost during the American Civil War and the Spanish-American War. During WW II the US Naval Air Station in Key West was expanded greatly. There is still today a large Naval presence. Navy Pilots are trained at the US Naval Air Station Key West.
Key West has been visited by a number of our U.S.Presidents starting with Ulysses S. Grant in 1880, followed by Grover Cleveland in 1889 and William Howard Taft in 1912. Taft was the first President to use the officer’s quarters now known as the “Little White House”. Franklin D. Roosevelt visited the Florida Keys many times starting in 1917. Harry S. Truman visited Key West a total of 175 days over eleven visits during his presidency. His first visit was in 1946. He also visited five additional times after his presidency. The Officers’s Quarters used by the visiting Presidents became known as the “Little White House” during the numerous visits by President Truman. Dwight D. Eisenhower recuperated at the Little White House after a heart attack in 1955. John F. Kennedy visited in 1961 and 1962. Jimmy Carter visited twice with his family after his presidency. Former President Bill Clinton and then Senator Hillary Clinton visited the Little White House in 2005. President Donald J. Trump made a short visit to Key West in 2018, but did not spend the night. The Little White House is open to the public, but private quarters are still available to current or past Presidents and their families.

Because Key West has such a long and varied history, I have only touched on some highlights to give you a sense of the place. There are many more events that shaped this unique island and the story continues to be written. 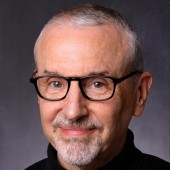 Jim Speake is an actor/ singer who divides his time between New York City and Key West FL. www.jimspeake.com “Bobby in the Lobby” at the Tennessee Williams Theatre, Key West, FL