Four months after his sold 54 Below debut, David Sabella returned to another sold out house to celebrate the release of his new CD Time Heals.  Sabella thrilled the audience with reinterpretations of everything from Sondheim to Freddy Mercury, with arrangements by Gregory Toroian; Christopher Denny; the late Rick Jensen, and music director, Mark Hartman. And, that voice! FULL DISCLOSURE: In addition to being an active performer and vocal performance coach, David Sabella is the Editor-in-Cheif of Cabaret Hotspot! 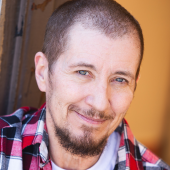 Conor Weiss is a NY based actor/director and occasionally stage manager who has been around the Cabaret scene since 1994 - 2003 when he first joined the staff as a technical director at Judys’ and at Danny’s Skylight room. During these years and the years after the closing of Judy’s and Danny’s he subbed in at many other clubs at one time or another. He has always had a deep love for the American Songbook and for cabaret. Between his time in the booth and time in the audience has probably been present for a few thousand cabaret shows over the last 27 years and looks forward to more! OnTheSpot: The Line Up Nov 9 On The Spot w/Conor, October @ Pangea