Josh Carr and Scottie Roche set out on a journey to tell the story of their relationship as lovers, exes and finally as best friends in their debut cabaret, The Wrong People Travel. After being struck by a car in 2010, Carr found himself bedridden for months, unable to walk but with an intense desire to travel. As his recovery progressed and he was able to gain some mobility, the urge to travel became stronger. He started to plan a long trip with Roche, his ex-partner. It was this rekindling of a friendship and the exploration of their relationship, past and present, that inspired Carr and Roche to write their show. “Like many queer folks, my ex is my best friend. It’s a unique dynamic that I hadn’t seen portrayed on stage. I wanted to share this hilarious and occasionally infuriating relationship through my love of musical theatre,” said Carr. Using music theater standards mixed with comedic, bawdy and often poignant personal stories, they tell a story of their not-so-traditional relationship of non-monogamy, queer love and friendship. They opened with songs reflecting their difficult childhoods and the blossoming of their romantic relationship, weaving their stories with A Quiet Thing from “Flora the Red Menace” (Kander/Ebb) and Lovesick (Yazbeck) from “Women on the Verge of Nervous Breakdown.” They cleverly used songs like Arthur in the Afternoon (Shire/Maltby), As Long as You’re Happy (Strouse/Maltby) and Under Separate Cover (Kleban) to explore this non-traditional, non-monogamous, non-heteronormative relationship. After an introspective and hilarious game of “who broke up with who first,” they ended the evening with a charming duet version of the title song, Why Do the Wrong People Travel (Coward).

As a debut cabaret, the evening was a success in many ways. Carr and Roche brought us into their friendship, successfully conveying an honest, humorous, and touching story of two people who find conventional joy in an unconventional, evolving relationship. A few of the songs, such as Buddy’s Blues (Sondheim), weren’t as polished in the presentation of the lyric or as united in the musical ensemble as they could be. The show will benefit from a few more times on its feet, both to solidify the flow between song and story and to allow both performers to feel more relaxed when conveying their unique and touching story. Both men posses lovely voices, which can be a blessing or a curse in cabaret. Both men sometimes over-sang the lyric. Perhaps the nerves of a debut show got the better of them in a few instances. Roche, in particular, seemed quite nervous as he spoke and sang. It is vital for both performers to present their story in their most authentic voices, knowing that their most authentic voice might not always be the prettiest sound they can make. The right sound is not always the best sound. The right sound facilitates the lyric, without calling attention to itself.

Overall, this was a very enjoyable evening of storytelling through word and song. I applaud them for their strength and honesty and look forward to hearing more from them in the future.

The show was directed by Topher Cusumano with music direction by Karl Saint Lucy. 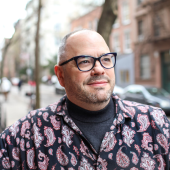 Michael C. Rider is a voice teacher, coach, performer and music director with a specialty in music theater techniques and the development of the belt voice. He is an adjunct professor of Voice at the John J. Cali School of Music at Montclair State University (MSU), where he teaches music theater voice and performance technique. He also music directs mainstage shows for MSU’s School of Theater. He has previously served on the faculties of CAP21/NYU Tisch School of the Arts and runs a private voice studio in NYC. Rider has presented workshops at NATS Regional Festivals, NYSTA’s Professional Development Program, the World Voice Health Day and the North East Theatre Festival for the EDTA (Educational Drama Teachers Association). His students regularly appear in shows on Broadway as well as productions off-Broadway, in regional theaters and on national and international tours. He [<--"RIDER"] has worked as a theater clinician at the Beacon School in New York and served as music director for their musical productions, including the first high school productions of Rent and The 25th Annual Putnam County Spelling Bee. He has also worked collaboratively at the piano with performers for cabarets in New York, New Jersey, Pennsylvania, and Hong Kong. Rider is a graduate of Westminster Choir College of Rider University (MM) and Penn State University (BM). He is also an active member of the National Association of Teachers of Singing (NATS), New York Singing Teachers Association (NYSTA), Music Theater Educators Alliance (MTEA), Manhattan Association of Cabaret (MAC) and the National Opera Association (NOA).