I’m new to Cabaret. In the great words of Aladdin and Jasmine, it’s “a whole new world.” (and for putting that ear worm into your head, you’re welcome).

I have been a professional opera/classical singer for over 25 years. I had a really lovely career singing in opera houses around the country, singing with orchestras around the world, and singing on recital stages wherever they would pay me. My opera career ended over a decade ago but my concert and recital career thrived until just a few years ago. I won’t go into the reasons my career slowed down but being one who is so used to the spotlight, I realized that I had to create my own opportunities if I wanted to continue to perform.  I have always needed music and a venue to say something with music – and I have a lot to say!

I started with a one-woman show. I took writing classes and dug deep into my childhood and feelings and stuff and came up with a piece, mostly spoken word with lots of music weaved into it, that was cathartic and challenging and  incredibly artistically satisfying. So as my 50th birthday approached, I decided that I wanted to celebrate with a follow-up to my one-woman show and the most logical way to do that was with cabaret.

Now, on paper, I SHOULD be great at cabaret. I’ve performed on stages all over the world for decades. I’m at home in the spotlight. I’ve sung jazz and showtunes many times in recitals and at galas and as a once-upon-a-time cocktail pianist not to mention the endless hours in my living room. As a voice teacher, I teach young musical theatre hopefuls how to mix and belt and have been a dramatic coach for years. How hard could this cabaret thing be?

Quickly I discovered I was NOT good at it. Not even close.

Sitting at the piano in the privacy of my studio and playing and belting out “Don’t Rain on My Parade” is one thing. But then, when there is a pianist there, and you are standing at the crook of the piano having to deliver “Don’t Rain on My Parade,” THAT is a completely different animal. I know how to sing. I know how to mix. But when I tried to sing this cabaret rep in a way that was convincing, I found my voice had no idea what it was doing. All of a sudden my cords weren’t approximating in the primo passaggio (there’s your fancy Italian phrase for the day) and when I opened my mouth, I had no idea what register would decide to make an appearance.

And this was only amplified (pun intended) when I had to do it in public. You quickly learn that in order to develop an audience and experience in the cabaret community, you have to become part of the community and that means you need to take part in the various open mics around the city as often as you can. My first three or four open mics were incredibly disappointing (from my singular point of view, of course) because after sitting for an hour or two, chatting with other people in the club, then having to get up in front of everyone and deliver a song, I couldn’t trust my voice. I had no idea what was going to come out. And when I get nervous and feel like my voice is not behaving, what do I do? I push. And we all know how reliable that is….NOT.

And then there’s the mic…..I’m not going to even talk about that right now.

By the time I figured out that I really wasn’t good at this cabaret thing, I had already made a commitment to do my debut show. Money had been spent, people were encouraging me, the date had been set. And I felt like an impostor.

I took a couple of voice lessons to try to figure out what was not working properly. I found a director who could encourage me to find the truth in my story-telling. I entered a cabaret competition which forced me to get up on stage every week, sing a different song, and get critiqued in front of the audience.

And eventually, I gained the confidence I needed.

And I got better.

And now I’ve performed my show twice with my New York City Debut only a few weeks away. And the people who have seen it have had really lovely things to say about it, which only adds to my confidence level.

I was walking down 46th Street recently and ran into a prominent opera agent I had worked with in the “old” days. He had seen my posts on social media about my new cabaret venture. He said to me, “Yes, this is the new thing – opera singers are now turning to cabaret!” It’s funny because I actually hadn’t heard or experienced that but as I get to know more people in the industry, I realize that there are indeed several “recovering” opera singers who have found a new direction in cabaret.

And I have something to say…. 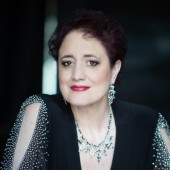